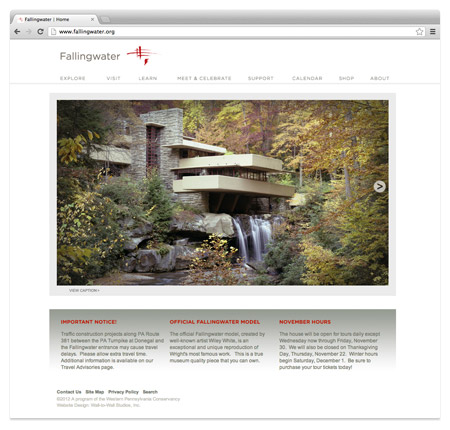 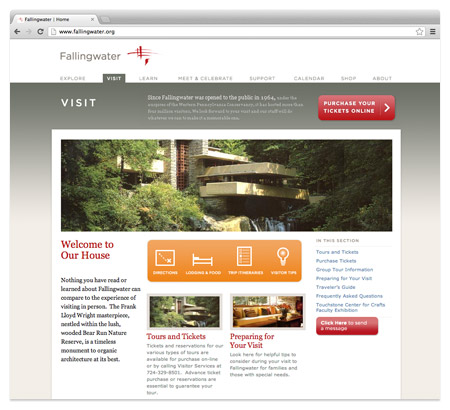 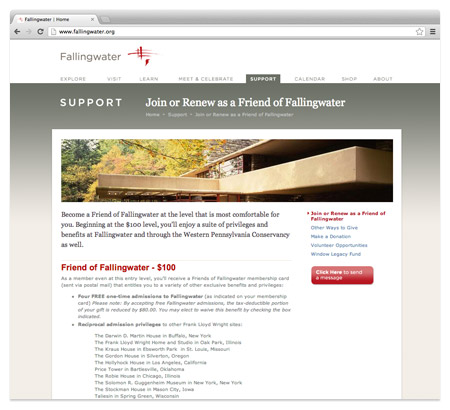 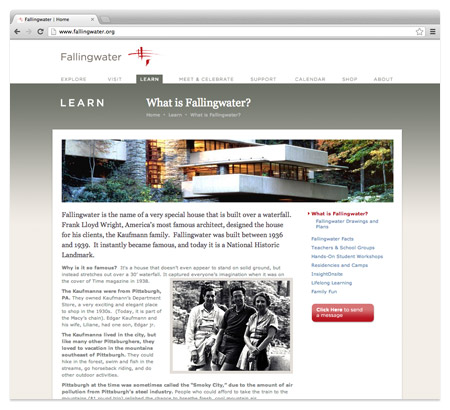 THE STORY OF FALLINGWATER

For centuries, the impact of water upon land had yielded a landscape of breathtaking beauty in the rural glens of Southwestern Pennsylvania. But in 1936, something even more dramatic began to rise from the rocks of a creek called Bear Run. Where undulating stream met unyielding stone…where the wildness of nature met the will of man…where the rising star of one man collided with the falling star of another, one of the 20th century’s greatest architectural achievements was built. Some might even say, “born”.

A living, breathing house in perfect harmony with its habitat, Fallingwater is recognized today as arguably Frank Lloyd Wright’s finest work. The building was voted the “best all-time work of American architecture” in a 1991 poll of members of the American Institute of Architects (AIA). To date, more than 4 million visitors have made the pilgrimage to the modern masterpiece at Mill Run.  The house on the waterfall.

Fallingwater is the epitome of “organic architecture”, a concept conceived by Frank Lloyd Wright and executed in many notable ways throughout his long career. As described by Wright, organic architecture promotes harmony between man and nature. Through thoughtful design that is seamlessly integrated with its natural setting, the building, the furnishings and the surroundings become cohesive parts of one unified, interrelated composition. Wright described it this way, “where the whole is [to] the part as the part is to the whole and where the nature of the materials, the nature of the purpose, the nature of the entire performance" are all equally important to the resulting building.

Commissioned to build a weekend home for the family of Edgar J. Kaufmann, a wealthy Pittsburgh department store owner, Wright first visited the Fallingwater site in 1935 at the age of 68. The family’s love for the rushing waterfall at Bear Run creek inspired the architect to envision a residence placed not across the stream from the falls, as the Kaufmanns were expecting, but directly over the falls where one would not simply view nature, but actually live within it.

Mimicking a natural pattern established by its rock ledges, Wright placed the house over the falls in a series of cantilevered concrete "trays" anchored to a central masonry chimney mass made of the same Pottsville sandstone as the rock ledges. Although the house rises more than 30' above the falls, strong horizontal lines and low ceilings help maintain the safe, sheltering effect Wright sought to achieve. To bring the natural environment into the house as well as to draw its inhabitants out, almost as much floor space is taken up by outdoor terraces as indoor rooms.

The partnership between patron and artist was a fruitful one, built on mutual respect and a shared love of new ideas and breaking boundaries. Introduced to Wright by his son, Edgar jr., who had studied with Wright at Taliesin, E.J. Kaufmann was intrigued by the vision of the aging genius who, at the time, was thought to be in the twilight of his career.

Buoyed by the timely commission, Wright, in turn, was taken by Kaufmann’s confidence and charisma. In Kaufmann, Wright sensed a man who would be open to his unconventional concepts and in Fallingwater, he envisioned an opportunity to bolster his fading reputation.

According to the accounts of several Wright apprentices, the first drawings of Fallingwater were, essentially, the last. The lines and curves of the house on the falls flowed fast and furious from Wright’s pencil just hours before Kaufmann’s unexpected visit to Taliesin to observe the progress of the design.  The name “Fallingwater” was conceived seemingly on the spot, hand-printed by the architect across the bottom of the drawings in Wright’s signature large capital letters.

Even before its construction was complete, Fallingwater captured the world’s imagination. Arriving on the national landscape during the Great Depression, Fallingwater not only revived Wright’s career and paved the way for some of his greatest buildings still to come, it became a symbol of hope and freedom from constraint for a generation. Its popularity has only increased and today, as a public museum operated by the Western Pennsylvania Conservancy, the house stands as a testament to the greatness that can be achieved when just the right elements converge at just the right time.